UTC Announces Randall Coleman as the incoming Director of Bands 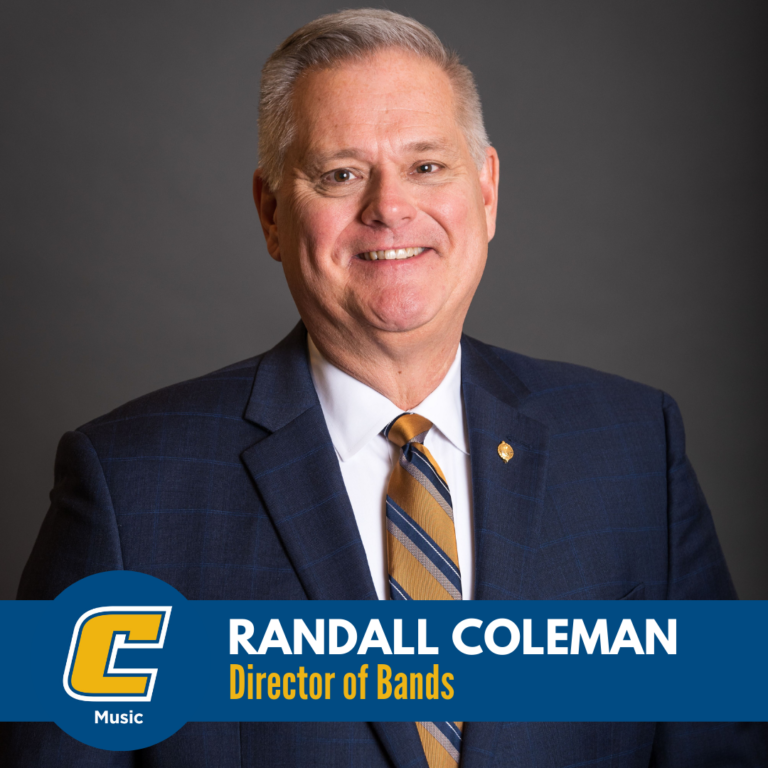 The University of Tennessee at Chattanooga, Department of Performing Arts: Music Division is thrilled to announce Randall O. Coleman as the incoming Director of Bands at UTC. For the past fourteen years, Professor Coleman has served as the conductor of the Alabama Symphonic Band and the Associate Director of the Million Dollar Band at the University of Alabama. He has also served as Conductor and Artistic Director of the Alabama Winds, an all-adult community wind band based in Birmingham, Alabama. Prior to his appointment to the faculty at the University of Alabama in 2007, Mr. Coleman enjoyed a successful 25-year career as a high school band director and supervisor in metropolitan Atlanta, Georgia. He received his Bachelor of Science Degree in Music Education at Jacksonville State University in Jacksonville, Alabama, and the Master of Music Education degree from Georgia State University in Atlanta, Georgia. During his teaching career in Georgia, Mr. Coleman was an active member of the Georgia Music Educators’ Association, where he held the office of President, First Vice-President and State Band Division Chair. Professor Coleman has been awarded the Citation of Excellence from the National Band Association on twelve occasions and was inducted into the John Philip Sousa Foundations’ Legion of Honor in 2004. Under Professor Coleman’s direction, the Milton High School Wind Ensemble performed at the 2004 GMEA Inservice Conference, the 2004 Bands of America National Concert Band Festival, and the 2006 National Convention of the Music Educators’ National Conference. At the University of Alabama, Professor Coleman conducted the Alabama Symphonic Band at the 2014 and 2020 College Band Directors’ National Association Southern Regional Convention, and the 2012 Alabama Music Educators’ Conference. He has also conducted the Alabama Wind Ensemble at the 2014 and 2020 American Bandmasters’ Association National Conference and at the 2010 College Band Directors’ Association Southern Regional Conference. Professor Coleman has served as a guest conductor of the Sabina Wind Orchestra in Rieti, Italy and conducted the Alabama Wind Ensemble as a part of the International Music Meeting in May of 2012 in Padova, Italy. He has been published six times as a Research Associate to the Teaching Music Through Performance in Band book series published by GIA publications. Professor Coleman has conducted the University of Alabama Million Dollar Band in performances at the Southeastern Conference Football Championships, and in the Sugar Bowl in New Orleans, Louisiana, the Rose Bowl in Pasadena, California, the Orange Bowl in Miami, Florida, the Fiesta Bowl in Glendale, Arizona, and the Mercedes Benz Dome in Atlanta, Georgia, where the Crimson Tide won the 2009, 2011, 2012, 2015 and 2017 National Championships. Under his direction, the Alabama Winds has given invitational performances at the 2015 and 2019 Alabama Music Educators’ Association Inservice Conference, the 2016 University of Alabama Honor Band Festival, the 2020 Samford University Honor Band Festival and at the 2017 Midwest Clinic International Band and Orchestra Conference in Chicago, Illinois. Professor Coleman has also conducted all state bands and all region bands across the country. Professor Coleman is an elected member in the prestigious American Bandmasters Association and is currently serving the National Band Association as 1st Vice President/President-Elect. He is also serving the College Band Directors’ National Association as the Alabama State Chair. Professor Coleman also holds membership in the National Association for Music Education, the Alabama Music Educators’ Association, the Alabama Bandmasters’ Association. Phi Beta Mu International Bandmasters’ Fraternity, and Kappa Kappa Psi National Honorary Band Fraternity. “It is a tremendous honor to be named as the Director of Bands at the University of Tennessee-Chattanooga. I am excited to get to work on campus this summer to begin the process of providing the best experiences possible for our students as we put the UTC band program on a trajectory for success. The level of support and commitment shown to me from the entire UTC family has been overwhelming, particularly from Dean Riggs-Gelasco and Dr. Benkert, and the Music Department faculty who have literally “moved mountains” to show their support of our shared vision. I am a believer in the quote “it takes a village” …and in the case of a university band program, that quote is especially true. In order to fulfill a vision, it takes a team effort from us all. As the UTC band moves closer to our 100th season in 2023, it is indeed an exciting time to be a part of the “new centennial” for the UTC bands. I stand on the shoulders of the UTC band directors who came before me, and I couldn’t be more inspired to be a part of such a rich history and legacy as we all work toward providing the UTC students with positive learning experiences through the pursuit of excellence in all that we do. Go Mocs!” – Professor Randall Coleman